Local Painter Everage King on Art After Hours, His Work and More

Meet Everage King, a retired art teacher and former preparator at the Cincinnati Art Museum who will be featured as one of 13 artists at the library’s Art After Hours.

Primarily an impressionist painter, King’s love of art traces back to his childhood when he would draw comics and cartoons like Superman and Dennis the Menace. Encouraged by teachers, he began taking the skill more seriously as a teenager. After high school, he served two years in the U.S. Army, and in 1979 earned a bachelor’s in Fine Arts in Education at the University of Cincinnati. Nearly 20 years of teaching in various cities — Baltimore, Dayton, Columbus and Cincinnati — followed, along with 15 years at the Cincinnati Art Museum until his retirement in 2014 from the latter.

“I handled masterpieces that you see in the textbooks,” King said of his time at CAM. “When I saw them, I would think, ‘Wow!’ It showed me the quality of techniques that artists used. It was like an instruction book just working there.”

What is King up to post-retirement? His days are mostly spent thinking of what to paint next, he said.

Take a look at King’s paintings and you’ll likely notice cityscapes home to Greater Cincinnati, where he currently lives. King said the environment he is living in informs his work. For example, while living in Dayton, King gravitated toward culturally focused subjects such as heroes, sports figures and religious icons. 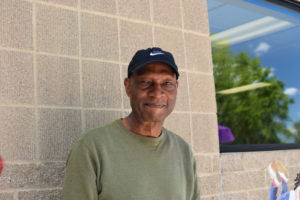 “In Cincinnati what I’m finding is landscapes,” King said. “Things that have to do with architecture catch my eye. I deal with shapes and forms and the interrelationships of colors.”

From Atlanta, Georgia, King said his body is “attuned to warmth rather than cold.” Though he doesn’t adhere to any particular color palette, the same is true in his art: King is drawn to warm neutral colors.

King plans to bring several for-purchase prints to Art After Hours, some of which he described: one depicts a marshy area in Anderson Township lush with greenery; another is a blue-hued cityscape picturing building rooftops backdropped by a hazy Cincinnati skyline; a single flower rises out of dead growth in yet another. Along with other prints, originals will also be available for purchase.

“It’s always exciting to hear people express the effect that my work has on them,” said King, who has been featured at the event twice before. “The feedback helps me understand where my work is going and how effective it is. I really want to do work that says something – not just a pretty picture but makes a statement that people can understand and receive.”

Art After Hours takes place Friday, July 30 from 7-9 pm at the Carrico/Fort Thomas Branch. The event is free and open to the public. The branch will close at 5 pm to set up for the event. Learn more about the event and other featured artists here.

All paintings pictured in article by Everage King.