Monsters from the mind of 8-year-old author Silas Gibson have taken over the Newport Dog Park.

Walk around the park’s path and discover monsters with twelve feet, others with sharp claws and gnarly teeth. Located directly behind our Newport Branch, the Picture Path featuring Silas’ creations from his self-published book Some Monsters Look Like This will be up through October.

Keeping in the theme of critters that go bump in the night, the flip side of the displays contain educational information about bats.

The recently-installed path was a surprise to Silas and his younger sister, Emery (age 5), who contributed a couple of drawings to the book.

“They were like, ‘Why are we going to a dog park?’” recalled their mom, Candace. John, their dad, added that the reveal was “very sneaky.”

Silas’ reaction to seeing his drawings placed along the trail? Succinctly put: “Cool!”

Knowing that other kids are seeing his work, Silas said, feels good “because people are learning about monsters.” 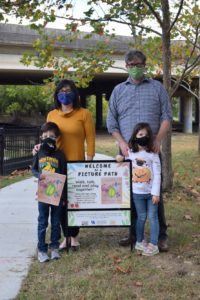 Silas (left) and Emery Gibson with their parents, John and Candace.

Residents of Bellevue, the path is just a short drive from where the family calls home. The idea to create a book first came when Candace gave Silas, then just 6 years old, and Emery, a blank book. Before that, they would draw on any paper they could find, leading to sketches scattered throughout the house.

“We went to Michaels and got a nice bound book and thought, ‘They’ll just grab this whenever they want to sketch,’” Candace said. “Instead it was, ‘No, this is going to be a book.’”

Over a two week period, Silas would sit in the living room and get to work drawing monsters of every shape and size straight from his own vivid imagination. The original book draft was 80 pages and 25 chapters, featuring 120 monsters. With the help of his parents, it was pared down to about 30 pages and included some of their favorite illustrations, including one by Emery, the artist behind the family portrait on the book’s back page.

Another book may be on the horizon, but Silas and Emery have also been dabbling in another medium: stop-motion film. Silas is the actor while Emery focuses on special effects, according to John.

Silas has taken a few of his creations off the page and made them 3-D via clay, but he hopes to convert his other monsters.

“I’ve drawn a ton (of monsters) and haven’t even made (most of them),” Silas said. “Some time I’m going to have to do a lot of work with clay because most of them haven’t been made yet.”

For now, our community can catch Silas’ and Emery’s monsters in the real world as they fly, bite, slither and crawl along the Picture Path.