Paul Johnson of California, Ky., has been named the outstanding public library trustee of 2018 by the Kentucky Public Library Association (KPLA). 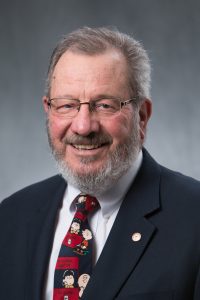 Mr. Johnson is a member of our board of trustees and serves on the board as its treasurer.

The James E. Gugeler Outstanding Library Trustee Award will be announced and presented April 12 during an awards luncheon at the Public Library Association Conference in Bowling Green.

Mr. Johnson has served on our board of trustees since 2011. He originally filled an unexpired term and is currently serving his second term as a trustee, which ends in 2020. His accomplishments include completion of a five-hour KPLA trustee training certification program, coming in weekly to the library to sign and approve checks in his role as treasurer, and being a leading participant and advocate for the library, its programs and services. Mr. Johnson is a current member of the Kentucky Library Trustees Roundtable of the Kentucky Public Library Association.

An avid carpenter, his workshop has stayed busy on behalf of the library as he was instrumental in building and distributing 50 “Little Libraries” that can be seen throughout

Bellevue, Newport and other Northern Kentucky cities. He frequently gives up his time, talent and resources for library events and activities.

“I have been fortunate to have a trustee like Paul,” said JC Morgan, director. “He’s never timid about asking questions, probing issues or jumping in to support causes. He well deserves this recognition and award.”

The James E. Gugeler Library Trustee Award recognizes the contributions of an individual who is currently serving as a trustee for a Kentucky public library.