Celebrate your right to read freely with libraries, booksellers, museums, schools and readers across the nation during Banned Books Week.

Held Sept. 18-24, Banned Books Week first launched in 1982 in response to a surge in challenges to books in schools, bookstores and libraries. The American Library Association’s (ALA) Office for Intellectual Freedom (OIF) has since tracked, compiled and released an annual top 10 list of the year’s most banned books.

The annual celebration emphasizes the harms of censorship by highlighting both historic and present-day attempts to restrict books and other materials.

Why is Banned Books Week Important?

The theme of this year’s event is “Books Unite Us. Censorship Divides Us.” When a community is given fair access to books, it fosters connection and understanding between readers. Censorship does the opposite; it builds barriers.

Banned Books Week empowers readers to access works that arm them with information and perspectives that help them better understand both themselves and the world around them.

According to data collected in 2022 from the ALA, the large majority of voters, 71 percent, oppose efforts to have books removed from their local libraries—that’s across the political spectrum.

Every year, the OIF compiles a list based on documented requests of the top 10 most challenged books at schools and libraries of the previous year. OIF tracked 729 challenges in 2021. Of the 1597 books that were targeted, below are the most challenged: 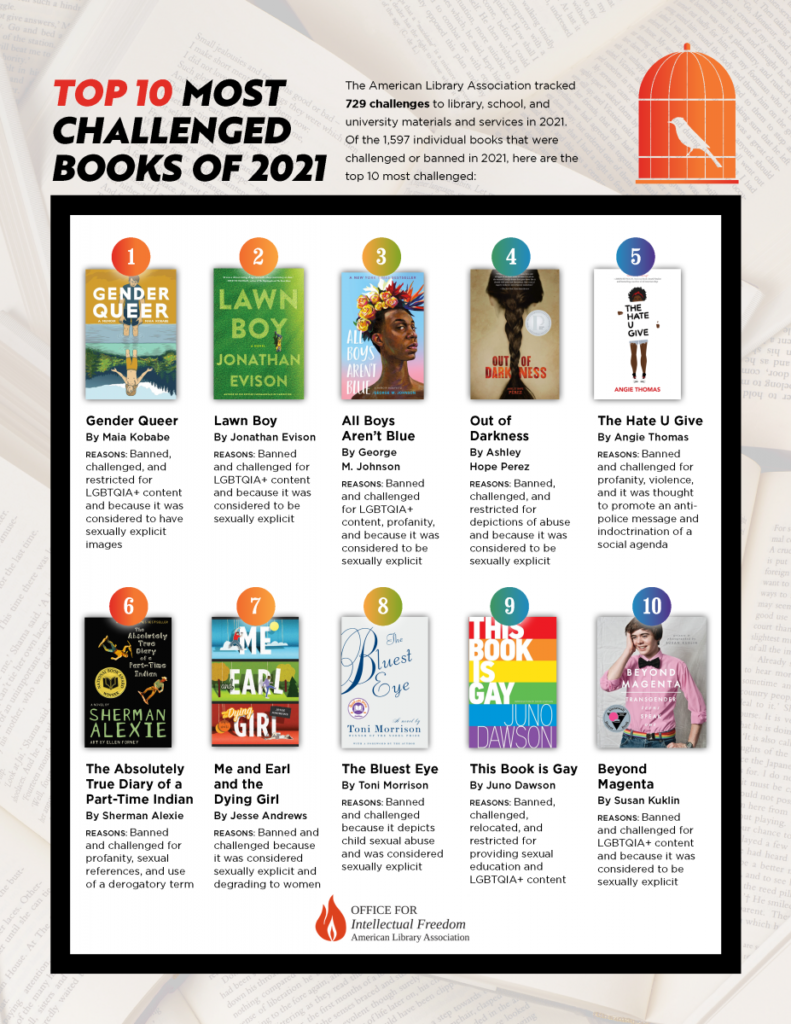 Banned & Challenged Books at the Library

According to the ALA, the titles included in the book list below are books that individuals and groups have attempted to remove from libraries and classrooms. All books on this list are available for checkout at the Campbell County Public Library.

Make sure to visit your favorite branch and keep an eye out for Banned Books Week displays!