If you drive through the Alexandria neighborhood of Arcadia during the holidays, you’ll likely notice their giving tree.

Kay Lambert, who was part of the neighborhood’s social committee, says that the idea came after the neighborhood’s members—mostly made up of individuals over the age of 50—were unable to gather for their yearly Christmas party due to the COVID-19 pandemic. The giving tree allowed the group to come together to donate to local organizations.

“The people have just given over and above,” Lambert says. “It’s been three years now that we’ve done this. So basically, that’s how we got started. And it has been very successful.”

Peer closer at the mittens: Each color represents a different Campbell County-based organization members can give to. Participants can choose a mitten and donate to the corresponding cause. Items were dropped off at designated houses and later taken to the various groups.

This year, the library’s Drop Your Drawers was among those causes; the initiative aims to stock public schools in Campbell County’s supplies of new underwear and socks. Arcadia raised over 467 pairs, pushing the Cold Spring Branch over its goal. Systemwide, the library received 9,106 items, surpassing its set goal of 7,000. 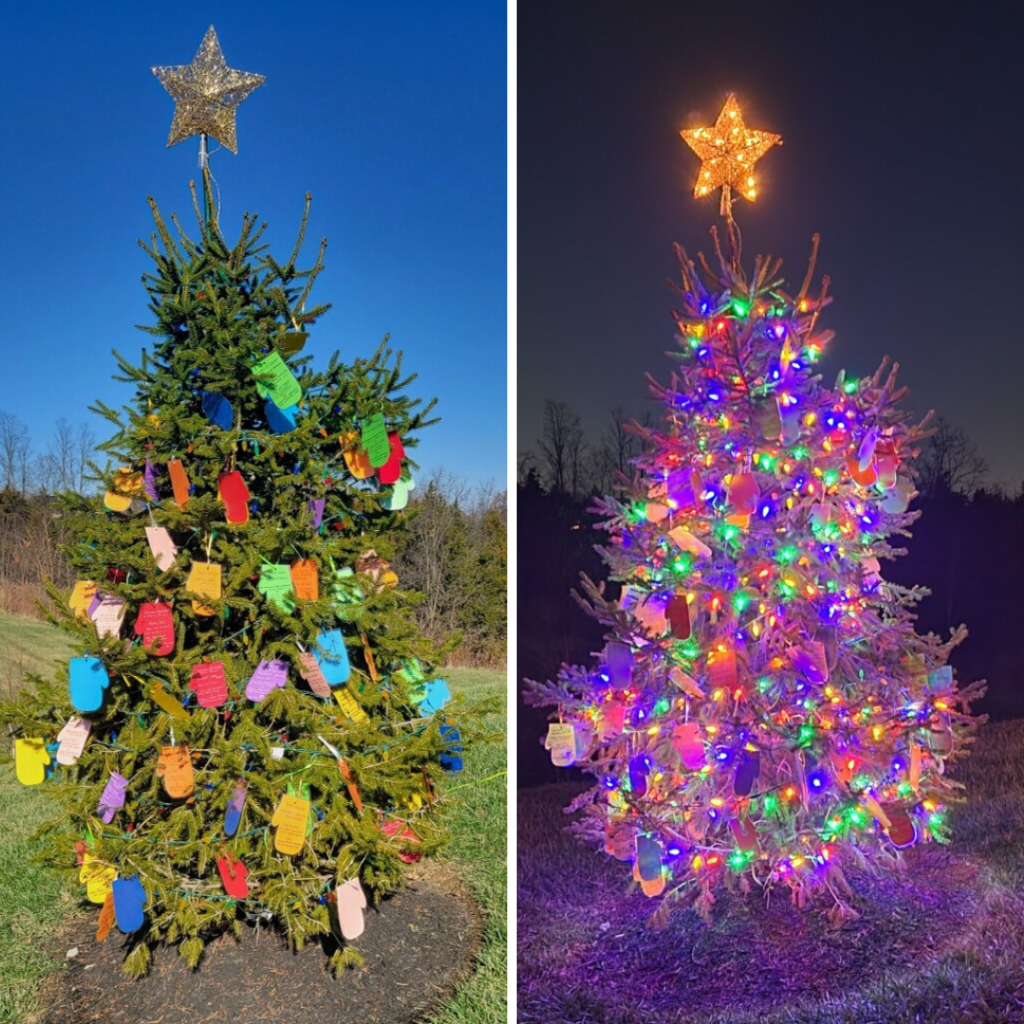 Residents choose a mitten that corresponds to an organization requesting donations. Provided by Kay Lambert.

Why mittens? The idea came to Lambert after a visit to the beauty shop. She saw a tiny tree with small mittens that included items an organization wanted donations for. When Arcadia decided to do a giving tree, the memory stuck with her.

Lambert says many take three or four different mittens in various colors and donate not just to one organization but multiple. The neighborhood’s enthusiasm has remained since the giving tree’s launch in 2020.

“We were, especially last year, overwhelmed with all the donations that we received. And, again this year, they really came in,” Lambert says. “We have two homes with a tub out front; our home is one of them and we ask people to drop all their donations there.”

Since many of Arcadia’s neighbors are over the age of 50, Lambert says the giving tree is an accessible way for members to get involved and give back to Campbell County. They give back to seven or eight local organizations each year.

According to Lambert, many residents were unaware that schools needed items like socks, underwear and other underclothes.

“I think a lot of people were shocked. I mean, that the schools would do this,” Lambert says. “And, yeah, they do. They have all these children coming into the schools and they see the needs of these children. It was good. I think people were excited about that donation [to Drop Your Drawers].” 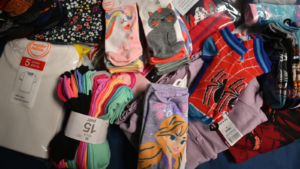 Drop Your Drawers donations from Arcadia residents, who gave over 400 pairs of new socks, underwear and other underclothes.

Other groups that donated to this year’s Drop Your Drawers include the Newport Optimist Club, the New Riff Distillery, NKY Wins, KY Through-Breasts, the Mary Ingles Chapter of the Daughters of the American Revolution and the staff at Walgreens #11495 to Alexandria.

Drop Your Drawers returns to the library every November. If you, your community, organization, workplace or club are interested in donating next year, stay posted at www.cc-pl.org/drop-your-drawers.

WHAT: Drop Your Drawers

WHEN: Drop Your Drawers runs annually from Nov. 1 to Dec. 31

RESULTS: 9,106 pairs of new socks, underwear and other underclothes across all four branches (Alexandria, Cold Spring, Carrico/Fort Thomas and Newport)

WHY: To help keep Family Resource Centers’ emergency supplies of socks and underwear stocked. Donations will be divided among public schools in Campbell County