YouTube Program: Dungeons and Dragons and other RPGs How To 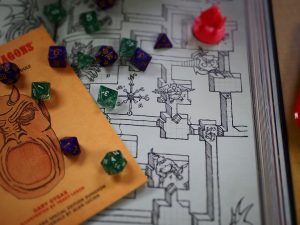 Wanting to learn how to play Dungeons and Dragons (DnD) 5e from the safety of your own home tavern?  Join us as Tori and Clara teach you the basics of not just DnD 5e, but of other systems too.

If you have any questions, contact Clara at cgerner@cc-pl.org or Tori at tstory@cc-pl.org for more information.

Maybe you prefer the settings you see in the Star Wars universe, or a dark world where the Elder Gods try to rise up forcing you to face off against Cthulhu as a 1920s era detective  Learn the Generic Universal RolePlaying System (GURPS) system that just uses 3 six sided dice, something most homes have available.

We will go over the basic history of each system, show how to get started, and talk about free resources available online.  Join us now so we can help jump start your own adventure!

D&D is put out by Wizards of the Coast

According to Wizards of the Coast the first Dungeons & Dragons game was played back when Gary Gygax and Dave Arneson chose to personalize the massive battles of their fantasy war-games with the exploits of individual heroes. This inspiration became the first fantasy role-playing game, in which players are characters in an ongoing fantasy story. This new kind of game has become immensely popular over the years, and D&D has grown to include many new ways to vividly experience worlds of heroic fantasy.

The core of D&D is storytelling. You and your friends tell a story together, guiding your heroes through quests for treasure, battles with deadly foes, daring rescues, courtly intrigue, and much more. You can also explore the world of Dungeons & Dragons through any of the novels written by its fantasy authors, as well as engaging board games and immersive video games. All of these stories are part of D&D.

Campbell County Public Library > YouTube Program: Dungeons and Dragons and other RPGs How To