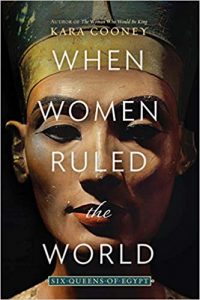 This riveting narrative explores the lives of six remarkable female pharaohs, from Hatshepsut to Cleopatra–women who ruled with real power–and shines a piercing light on our own perceptions of women in power today.

Female rulers are a rare phenomenon–but thousands of years ago in ancient Egypt, women reigned supreme. Regularly, repeatedly, and with impunity, queens like Hatshepsut, Nefertiti, and Cleopatra controlled the totalitarian state as power-brokers and rulers. But throughout human history, women in positions of power were more often used as political pawns in a male-dominated society. What was so special about ancient Egypt that provided women this kind of access to the highest political office? What was it about these women that allowed them to transcend patriarchal obstacles? What did Egypt gain from its liberal reliance on female leadership, and could today’s world learn from its example?

Celebrated Egyptologist Kara Cooney delivers a fascinating tale of female power, exploring the reasons why it has seldom been allowed through the ages, and why we should care.

Kara Cooney is a professor of Egyptology at UCLA. Her academic work focuses on death preparations, afterlife beliefs, and gender studies. She is currently investigating coffin reuse during the Bronze Age Collapse, allowing her to examine funerary objects in dozens of museums around the world, including the Egyptian Museum in Cairo, the Louvre in Paris, British Museum in London, and the Metropolitan Museum of Art in New York. She appeared as lead expert in the popular Discovery Channel special The Secrets of Egypt’s Lost Queen, and is the creator and host of Discovery’s Out of Egypt. Her book, The Woman Who Would be Queen, was published in 2014. In 2018 her book, When Women Ruled the World: Six Queens of Egypt, will be published by National Geographic Books. She lives in Los Angeles.

About the Book Club

Real Men Read is an open forum book discussion covering non-fiction, historical and science fiction, memoirs, and current events titles. Our tradition in Real Men Read is to stick to books with long titles and sub-titles, even if it’s fiction. All are invited! To have a book set aside for you contact Dave Anderson at 859-781-6166, x.13